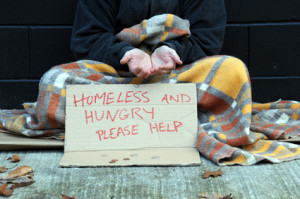 In February of this year I wrote an article (see link below) about 90 year-old Arnold Abbott, founder of “Love Thy Neighbor.” Love Thy Neighbor is an all-volunteer, not for profit organization in Fort Lauderdale, Broward County, Florida committed to helping the homeless community.

Fort Lauderdale City Ordinance disallows Mr. Abbott and his organization to feed the homeless in an area along the beach. Sixteen years prior following 3 Circuit Court trials and 2 in the Court of Appeals, the state over-ruled the law. As far as Mr. Abbott is concerned this is a moot issue. None the less, the battle has not stopped. While Mr. Abbott continues his ministry, the City fines and arrests him for being in violation. Making national headlines and shedding a dark shadow over the City, finally a Judge calls for mediation, which really excited me!

I kept following this story and soon after March of this year it simply disappeared. So I called Mr. Abbott directly and had a lovely phone conversation with him. He was kind enough to take some time and speak with me and shared the details of his story.

Naturally I was curious about the mediation process, in addition to the story itself. I was shocked and quite dismayed to discover that the case NEVER went to mediation. In Mr. Abbotts’ words he feels that the City used the mediation as a tool to “cool the issue” and wane publicity, which clearly it has. In the interim, Love Thy Neighbor wants to move forward because they continue to do their work and each time they do, Mr. Abbott’s jail days and fines increase. He told me that he’s accumulated approximately 1,920 jail days and over $16,000.00 in fines thus far as he’s continued to feeding the homeless by the beach two times a week.

In his frustration with the standstill Love Thy Neighbor has filed a contempt of court action against the City. There is a hearing set in July regarding the feeding situation, hopefully a resolution will come then.

The following are statistics I’ve gathered to give you a greater understanding of the homeless issue across the United States, as well as in Broward County, Florida.

• In January 2014, 578,424 people were homeless on a given night. Most (69 percent) were staying in residential programs for homeless people, and the rest (31 percent) were found in unsheltered locations.

The following information is retrieved from The CITY OF FORT LAUDERDALE 2010 – 2015 Consolidated Plan “a comprehensive strategy to address housing, economic and community development needs.”

As provided on February 18, 2010, the Broward County Homeless Initiative Partnership Office conducted a Point-In-Time Count & Survey of the homeless on January 29, 2009 and found that there are 800 homeless women, men, and children literally on the street in Broward County of any given night. That is a 14% increase since the last count in 2007 and reflects the worsening economic conditions during that time frame, 20.8% of the homeless are children.

The following is the link to the article I originally wrote regarding Mr. Abbott on February 13, 2015: