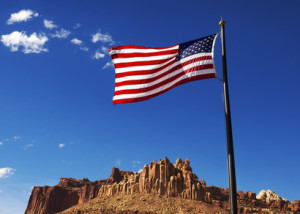 There was a very interesting article posted in a LinkedIn group HOMEOWNERS ASSOCIATION (Condo & Co-Op HOA) by an attorney involved in a flag situation in Utah that made national news. Always an interesting and compelling topic, I read the article which discussed homeowner’s versus an HOA’s rule restricting placement of the American flag; condominium restrictions; and Utah’s Flag Act of 2005. While I find this all fascinating I learned two points of information that really intrigued me.

As you read the article you will see a brief mention that “America’s first modern Condo project was developed in Utah.” This passing comment sparked my interest. Back in April of this year I wrote an article about the history of the HOA and where it all began, so learning the first modern condo project was developed in Utah surprised me, and I had to investigate further. Embedded in the flag article was a link to a newspaper article published in November, 2012 about Keith Romney, who is considered the “Father of Modern Condominiums.”

Initially hired as legal counsel for developers who wanted to build a 50 year old and above co-op apartment complex, Mr. Romney began researching the concept. Through his research he found and suggested creating condominium style living a more viable option for the area. He felt that interest in Utah would be to own vs. leasing one’s apartment and sharing common grounds.

Having learned about the inception and history of condominium living, originally introduced by the Romans (from Latin com- + dominium domain) Mr. Romney presented this new “old” idea to the Legislature to pass the Utah Condominium Act of 1960. Subsequently, the Graystone Arms condominium in Salt Lake City, became America’s first condominium building. Since that time, countless condominiums have been built and sold throughout the United States.

I mentioned at the opening of this article I had learned two points of information that really intrigued me. The first of which was the origins of the condominium here in the United States. The second you may find a bit trivial but a little trivia always makes for fun conversation. Did you know that when making reference to a person who lives in Utah that the proper term to use is Utahn(s)? I had no idea!

Use this link to read the article “Flying the American Flag – Can and Should HOA’s restrict?” By: Peter H. Harrison

Use this link to read the article “About Utah: Father of Modern Condominiums will never live in one” By: Lee Benson, Deseret News